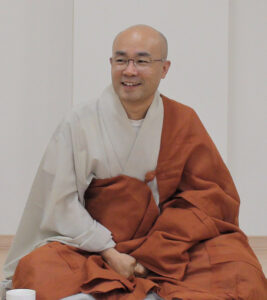 Tan Wol Sunim was born in Korea in 1971. In 1994, while studying at Dongguk University in Seoul, he met one of Zen Master Seung Sahn’s American disciple and started practicing for the first time. After deeply realizing that the answers to life’s big questions can be found in Zen practice, he decided to become a monastic and started practicing at Hwagyesa Temple.

Immediately after graduating from university, he became a Postulant (HaengJa), training at Hwagyesa and ordained as a monk with Sami (novice) precepts in the Jogye Order in 1996. He received bhikkhu precepts in 2000 from the Kwan Um School of Zen and in 2005 from the Jogye Order of Korean Buddhism. He has worked held many different positions, including Head Monk practiced at Hwagyesa, Musangsa, Providence Zen Center and several Korean Zen monasteries.

Tan Wol Sunim received Inka in 2012 and Transmission in 2022 from Zen Master Dae Bong at Musangsa. He is currently Seon Won Jang (co-guiding teacher) and vice-abbot at Musangsa.

Back to top of page