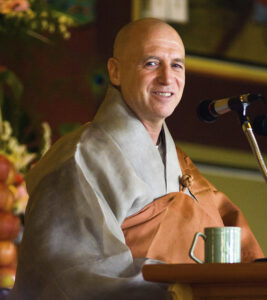 Zen Master Dae Bong was born in 1950 in Philadelphia, USA. He studied psychology at university, and later worked for five years as a psychiatric counselor in a hospital and as a welder in a naval shipyard.

He first met Zen Master Seung Sahn in 1977 at a lecture at the New Haven Zen Center. That time someone asked the Zen master, “What is crazy and what is not crazy?” The Zen master replied “If you are very attached to something, you are very crazy. If you are a little attached to something, you are a little crazy. If you are not attached to anything, you are not crazy.”  Zen Master Dae Bong thought that answer was better than anything he had learned at University or during his work in the last 10 years, and realized that he had found his teacher.

He became a Zen monk in 1984, thereafter, he began living and practicing full time with Zen Master Seung Sahn at different Zen centers around the world. Zen Master Dae Bong has practiced and taught in the U.S., Europe and Asia, and was the abbot of Zen centers in Paris, France as well as Berkeley, CA, and Cambridge, MA. in the USA.

Teaching Article
Back to top of page